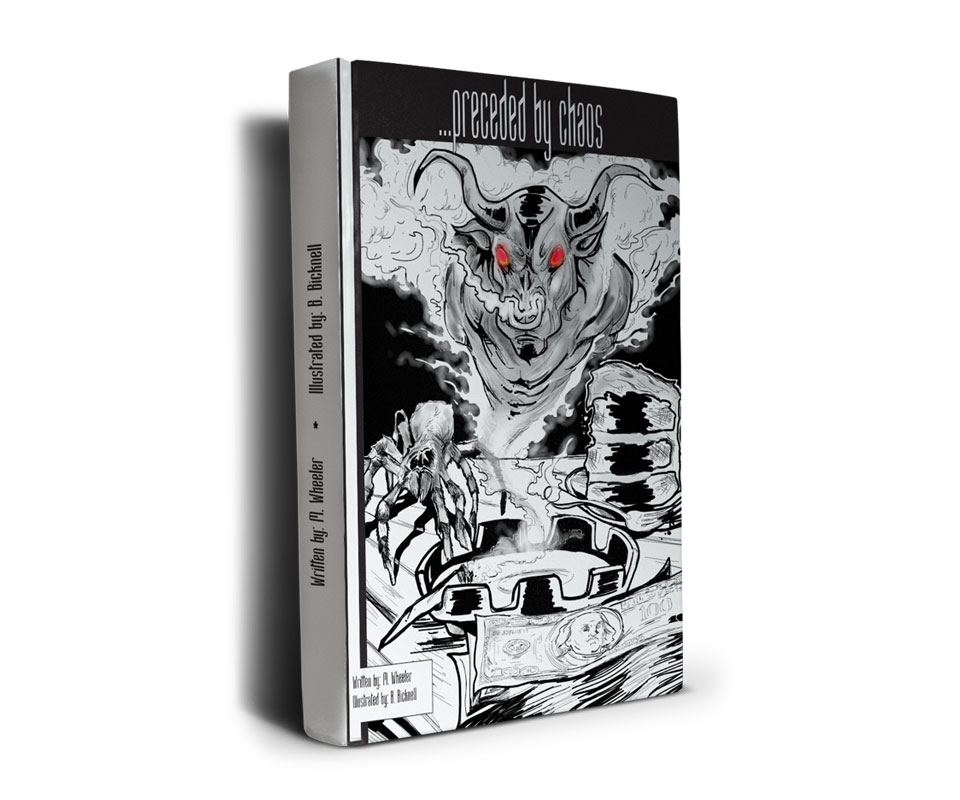 Excitement and intrigue, with a touch of the dark side is what you’ll get when reading an M. Wheeler short story. Wheeler employs a style of writing where instant gratification and his love of story design reign supreme. Short stories, an underappreciated genre, have been at the forefront of his writing career. A lover of comic book heroes since he was young, Wheeler started writing in the 3rd grade, with scripts of movie heroes as a foundation.

Wheeler was also drawn to sketch art, so writing was the perfect way to allow both passions to coexist. Throughout school, relocating a number of times made it difficult to make friends. As a loner, he was drawn to shorter novels and short stories, where his writing became an outlet and respite during his early educational years.

In high school, he stopped writing as his style and descriptive desires began to take a turn. No stranger to hard work and working for what you want, Wheeler worked a number of jobs from late high school to the beginning of medical school, and where the work ethic adapted from his grandfather took shape.

Resuming his hobby of writing in college, he added sketching to his repertoire, dreaming up the idea of creating a graphic novel. Through this outlet, he effortlessly channeled the frustration and energy of being raised by a single, 16-year-old mother, while harnessing the reality of having an ex-drug dealer for a father. No stranger to disappointment, he endured the pain of watching his grandfather, the only father figure he knew, die in jail. Wanting a change in life, Wheeler started medical school at age 30, an undertaking that at an early age he felt was too much time and commitment.

Even though it was tough, he drew upon his experiences in various jobs to provide the drive and motivation for seeing this through. During his residency, he wrote his first two books, halfway completing the third. Finally realizing this was the best decision he could have possibly made, he continued his love of writing, reshaping his style to create the interesting graphic novels we know today.

M. Wheeler writes short stories, and uses the term graphic novel to explain the way his stories are packaged (thin individual, illustrated, stories in a small travel sized book). He chose this style of writing to satisfy the love of reading for many people who would not commit to reading a 300-500-page novel. As well as appeal to readers that have difficulty following a story line that is being directed by illustration alone, or who feel that the genre is for adolescents or comic book geeks (which is categorically false).

As a busy doctor, Wheeler wanted to provide an outlet for those individuals who did not have long periods of time or attention to dedicate to a novel. The overall intent was to continue to contribute to the content that makes the graphic novel genre a mature, mainstream form of entertainment. Wheeler prefers certain favorites such as In Cold Blood, Devil in the White City, Pimp, Native Son, Batman Returns, and Fear and Loathing in Las Vegas.

These stories have fueled his writing style, with the addition of illustrations working with his stories to create a world in which the illustrations are not just ostentatious adornments, but actually integral parts of the story that enhance the story and help move the plot – a fusion of two great genres. Wheeler’s bite-sized formats of this type of entertainment can use depth of written word and the beauty of illustration to create a world that stimulates several sub-senses visually, while using the popularity of graphic novel to increase the readership of short stories.

An avid sports fan, Wheeler enjoys both playing and watching sports, and is a supporter of the New York Mets. From childhood, Wheeler has been on the move, living all over Connecticut; in Santa Ana, California; New York; San Francisco; Boston, and now Miami. One of the most intriguing writers in this genre, Wheeler is far from ordinary.

A well-rounded individual who can add personal experience to his stories, he has held positions as a UPS loader, studio engineer; dry wall installer; mover, scientist, bartender, server, teacher and assistant buyer, finally settling on being a medical doctor and volunteer.

He enjoys a number of activities, including exercising and taking long walks on the beach. His favorite colors are blue and grey. A perfect example of “don’t judge a book by its cover,” M. Wheeler’s stories are just a few reasons why reading opens up a world of infinite possibility.